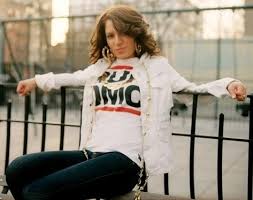 Emily King is the biracial daughter of accomplished jazz singers/composers Marion Cowings and Kim Kalesti. Due to their similar backgrounds, King is compared sometimes to the singer Alicia Keys.
Her debut album, East Side Story 2007; it gets it’s title gets it’s from New York City’s Lower East Side, where King was raised.
“I’ve been singing since I was a young kid,” she said, going on to state that despite both her parents being singers, she wasn’t pressured to follow in their footsteps as a vocalist. “I just always kind of knew. Something in my heart said that’s going to be it.”

Emily King from heydoyou on Vimeo.
I got to see her sensational performances at Rockwood Music Hall.. Check out the cutie on the keyboards…. what!  Just when I thought I was over music guys.. swoons..