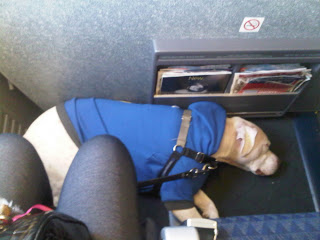 Service Dogs get to sit front row on the plane 🙂

Jackson is a 6 year old Chocolate Labrador. He was rescued from the vets office when he was young by one of the ABS Service dog trainers.  In 2005 our trainers brother, Dr. David Carr, a local pediatrician in Orlando, Fl. became ill.  He was misdiagnosed with MS, and had a rapid onset of an unknown disease.  He slowly deteriorated, lost fifty pounds, lost his vision, mobility and ability to eat.

On his “death bed” at Shands Hospital in Gainesville, Fl the doctors discovered that it was Pernicious Anemia, Vitamin B12 deficiency.  Dr. Carr was told by his doctors that he would probably gain his sight back, but he would not walk again.  Our trainer, that had Jackson, trained day and night to shape Jackson to be a balance dog for Dr. Carr.  Jackson assisted Dr. Carr in his rehabilitation, and helped him learn to walk again.  Jackson would sense when Dr. Carr was losing his balance, and he would support him.  Jackson is now enjoying his retirement, and teaching all of the new service dog puppies we bring along.  He is a true working dog! 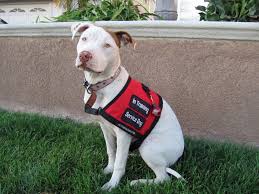 Remember, service dogs comes in all shapes and sizes… Does a lot of different things to help people. 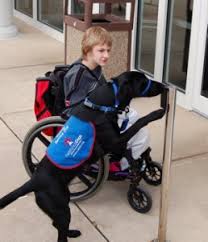 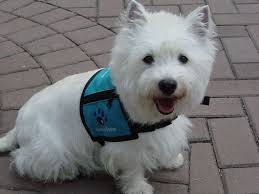