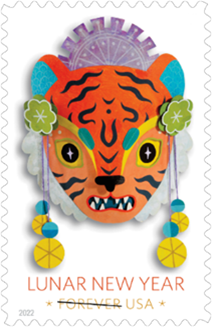 The Year of the Tiger begins Feb. 1 and ends Jan. 21, 2023 and is observed by over a billion people worldwide. This event commemorates the third of 12 postage stamps in the Lunar New Year series.

This is a free ticketed event. Information on how to obtain free can be found at usps.com/lunarnewyeartiger.

The tiger is the third of the 12 zodiac animal signs associated with the Chinese lunar calendar. As with other zodiac signs, personality traits and other attributes are often associated with people born in the year of a particular animal. Those born during the Year of the Tiger may be seen as brave, confident and well-liked by others. Blue, orange and gray are lucky colors for Tigers, and yellow lilies and cineraria flowers may also bring good luck.

Customers may purchase these stamps onsite, at the Postal Store at usps.com/shopstamps, by calling 844-737-7826, by mail through USA Philatelic, or at Post Office locations nationwide. The Postal Service generally receives no tax dollars for operating expenses and relies on the sale of postage, products and services to fund its operations.