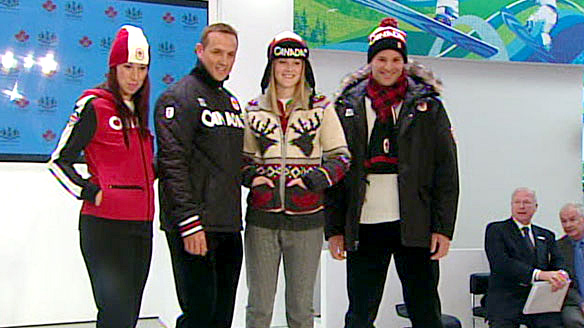 The Olympic games have started and Vancouver is the place to be!  There is so much buzz and inspiration around Olympic fashion!  As you all know, Team Canada is outfitted by the Hudson Bay Company via a $100 million contract from 2006-2012. and Team USA is outfitted by Ralph Lauren. Coca-Cola is one of the first major marketers to embark on a zero-waste, carbon-neutral sponsorship of an event as complex as the Olympic Games. Kudos to corporates taking a global stance!

Outfit made of recycled pop bottles in front of a hybrid-electric truck in Vancouver
VANOC also created an award, the “Sustainability Star” to recognize partners for their efforts. Coca-Cola was one of the first corporate sponsors to receive the award. Ah-mazing!

I want these!  (via prettyballerinas.us)

and this too ^_^ (via ralphlauren.com)
Are you watching the Olympics?