The most exciting part of tonight’s episode is Blair Waldorf (Leighton Meester)’s selection of her royal bridesmaids. Recruiting her “former minions” for an impromptu bridal booty-camp, the girls race to pin a dress, fight the paparazzi all without spilling a glass of champagne. Charlie (Kaylee DeFer) joins the contest so she can cover the royal wedding, but it turns out the deal-breaker is scoring a kiss with the noted bachelor Nate Archibald (Chase Crawford) at the launch party for the NY Spectator. 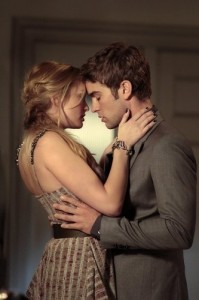 Not only does Nate find out that his office lover Diana (Elizabeth Hurley) not been seeing another guy for the last two months, she’s also bringing him to the party! Ouch. But please, don’t fall for Charlie. This Ivy girl needs to get out! Is anyone else sick of her yet? Even Vanessa (Jessica Szhor), as horrible as she was, wasn’t as annoying. I can’t believe she not only got to kiss Chase Crawford but now she gets to be a part of the royal bridal party. Apparently all women are the same and get jealous when they see another woman with her man. Diana and Nate officially declare their relationship on NY Spectator and Diana gives Charlie a nasty warning.

On another note, Dan (Penn Badgley)’s literary movie is on the rocks, obviously, as long as Serena (Blake Lively) has anything to do with it. She convinces him to drop the rights, but once she does she finds out her boss plans to make a movie on Dan as a guy who betrays his friends for fame (undoubtedly the better part of the story). “Inside will be the next Social Network. We’re gonna Zuckerberg him.”

Prince Louis (Hugo Becker) is messing with Chuck (Ed Westwick)’s therapist, trying to pay her to force him into a rage to remind Blair that she made the right choice. I understand that he feels threatened, but he’s already won. They’ve both already won, yet they’re still fighting to be together. This is going to be the wedding of the century and still they’re just trying to prove to each other that they’re the one for each other.

Chuck appears at Blair’s place one last time to say good-bye, with the most heartfelt words I’ve ever heard him speak. “I’m sorry I didn’t tell you I loved you when I knew I did. Most of all I’m sorry that I gave up on us and you never did.” After looking at the darker, scheming and hopelessly self conscious Prince Louis tonight, Chuck doesn’t look so bad right now. I’ve given up on the Blair/Dan situation, but I’m not believing in the fairy tale anymore.

Celebrity Fragrances! Love or Hate Them?