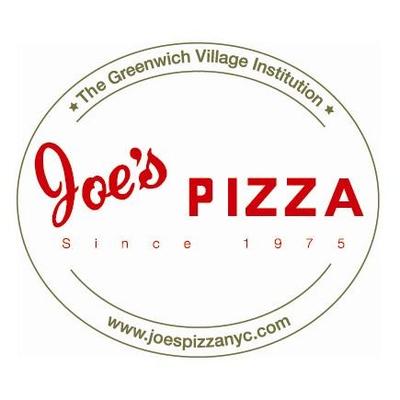 If you have ever lived in New York City, you would definitely know or even have tried from this world famous pizza store – Joe’s Pizza. The first time Joe’s Pizza’s name comes out to the world is from the movie of Spiderman. After a late delivery, Parker is sacked from his job delivering pizzas for Joe’s Pizza, 233 Bleecker Street at Carmine Street in the West Village, New York. Now Joe’s Pizza has five locations in New York, 2 locations in Shanghai and the latest one in Ann Arbor Michigan.

Established in 1975 by Joe Pozzuoli, who is originally from Naples, Italy, the birthplace of pizza, Joe’s Pizza is a “Greenwich Village institution” offering the classic New York slice for over 37 years.  First,  we served our customers from our corner location at Bleecker and Carmine Street and now three doors down at 7 Carmine Street.  At 75 years of age, Joe Pozzuoli still owns and operates the restaurant.

Joe’s Pizza is a perennial top 10 listing in restaurant guides and publications such as Time Out New York and New York Magazine. NEW YORK MAGAZINE named JOE’S PIZZA “Best of New York” and in subsequent reviews referred to us as “the quintessential New York slice.” In 2009 GQ Magazine listed Joe’s Pizza as one the “Best 25 Pizzas on Earth.”

Throughout the years Joe’s Pizza in Greenwich Village has become just as popular with visitors and tourists as it is with native New Yorkers who know where to come for an authentic New York street slice. 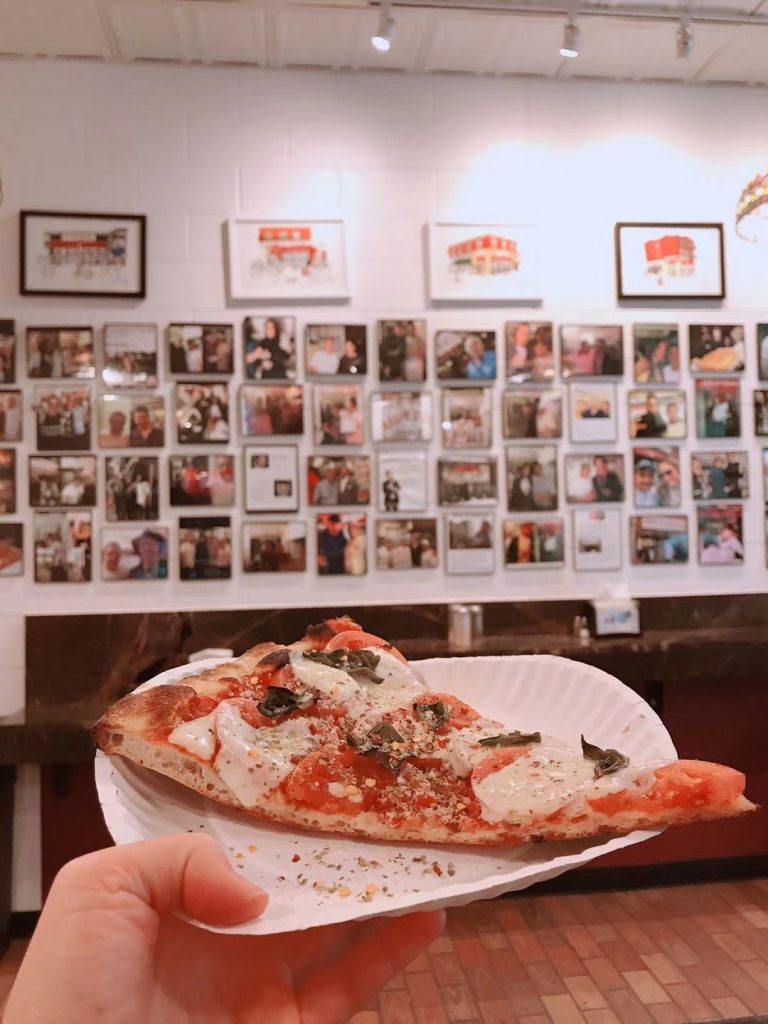 After commissioned five times to draw all their New York locations by Joe’s Pizza, Lulu was invited to fly to Ann Arbor to do a whole wall mural for this latest opened store. She is so happy and honored to do this amazing commission. The photo above was a photo taken by Lulu – she is holding a slice of Caprise Pizza facing to the celebrity photo wall with her four custom Joe’s Pizza illustrations.

The mural is 16”x11” on a smooth dry wall on the hallway of the store. She used quick dry acrylic paints. 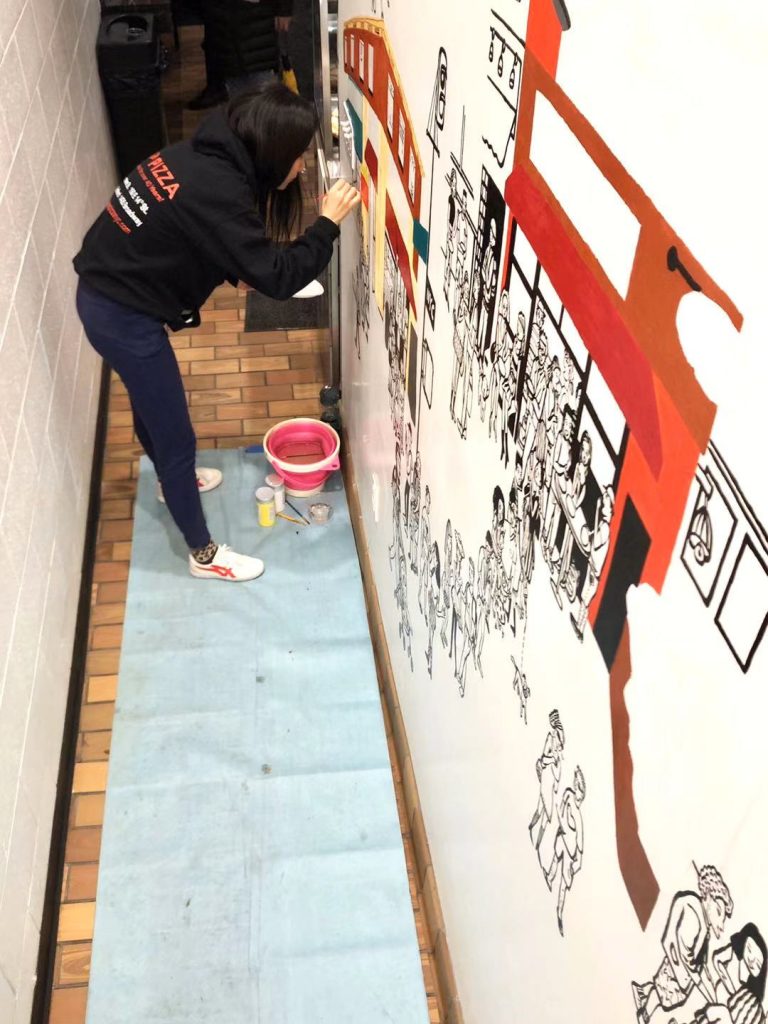 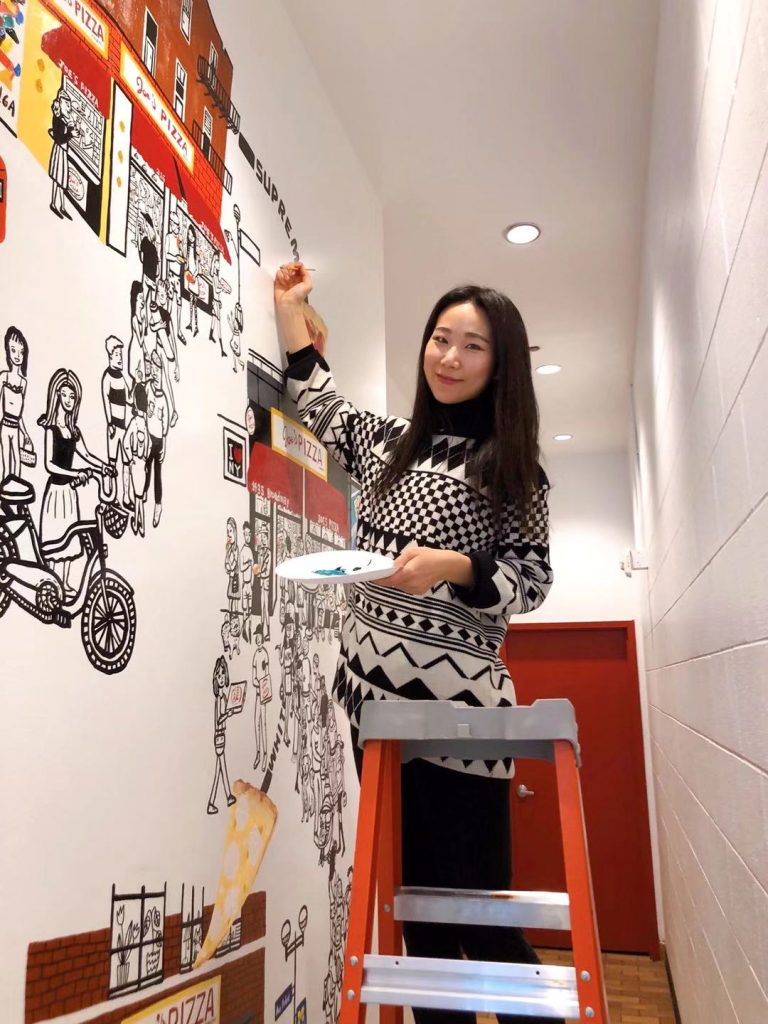 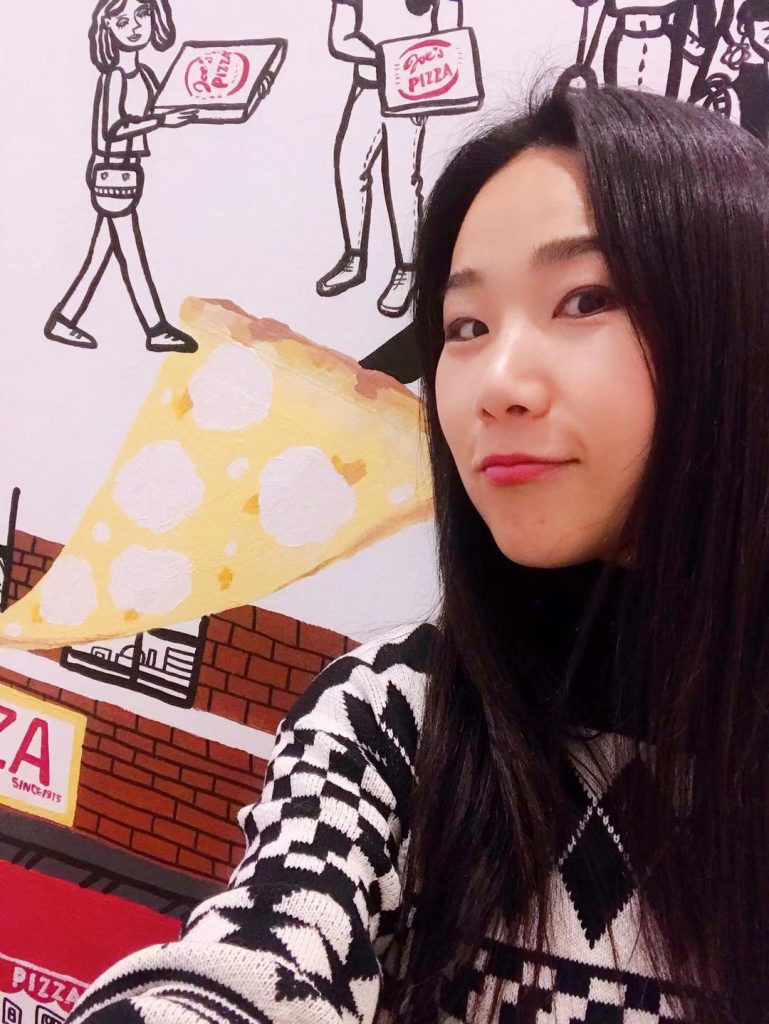 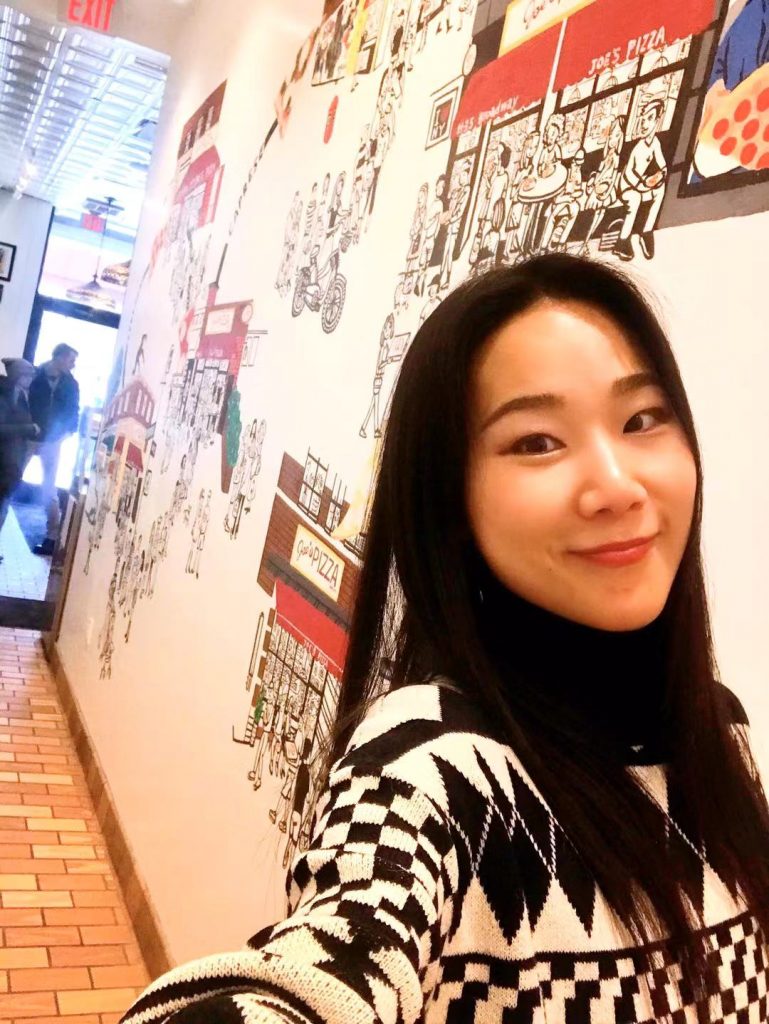 The mural tells a storyline of Joe’s Pizza, from their first location at Bleecker Street to the second, which is Carmine Street, then 14th Street, Williamsburg to Broadway, Times Square and then the latest location at Ann Arbor. All the locations are arrowed by the name and the visual of Joe’s Pizza’s signature pizzas. It took four and half full days with 14 hours per day. Lulu says she loves Joe’s Pizza, it has been a great experience working with Joe’s Pizza. She feels warm and happy, Joe’s Pizza is more like a close friend or family than just a client to her. So she wants to do it good, try the best she can. And it turns out great, she is very happy about the finish work. 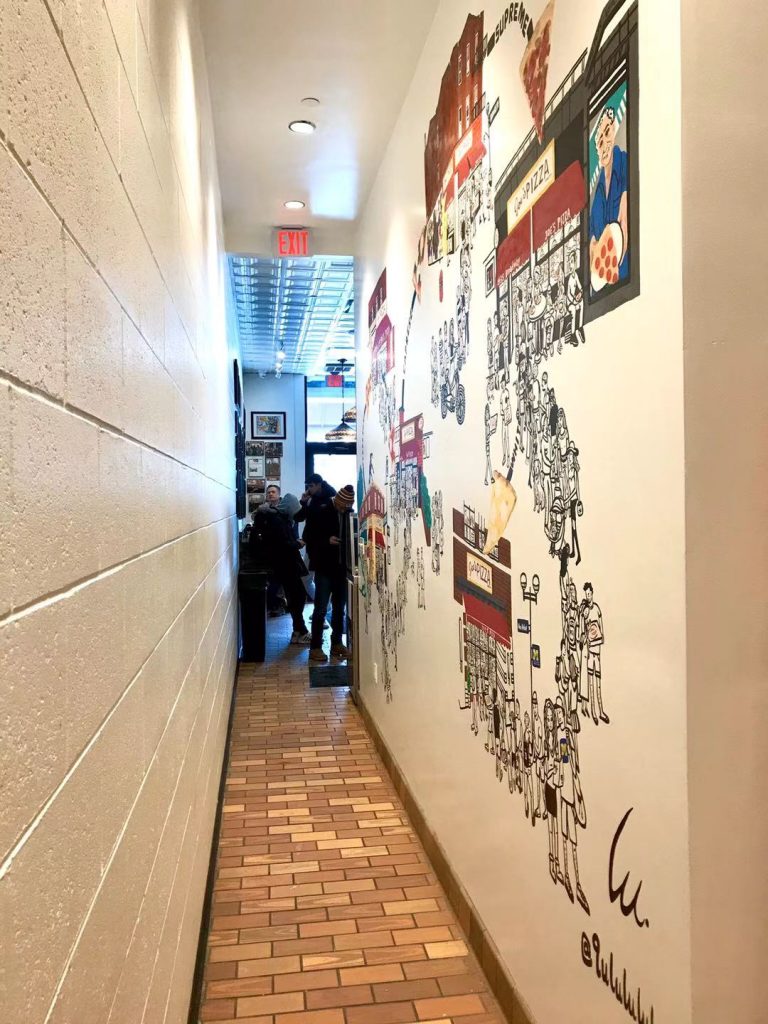 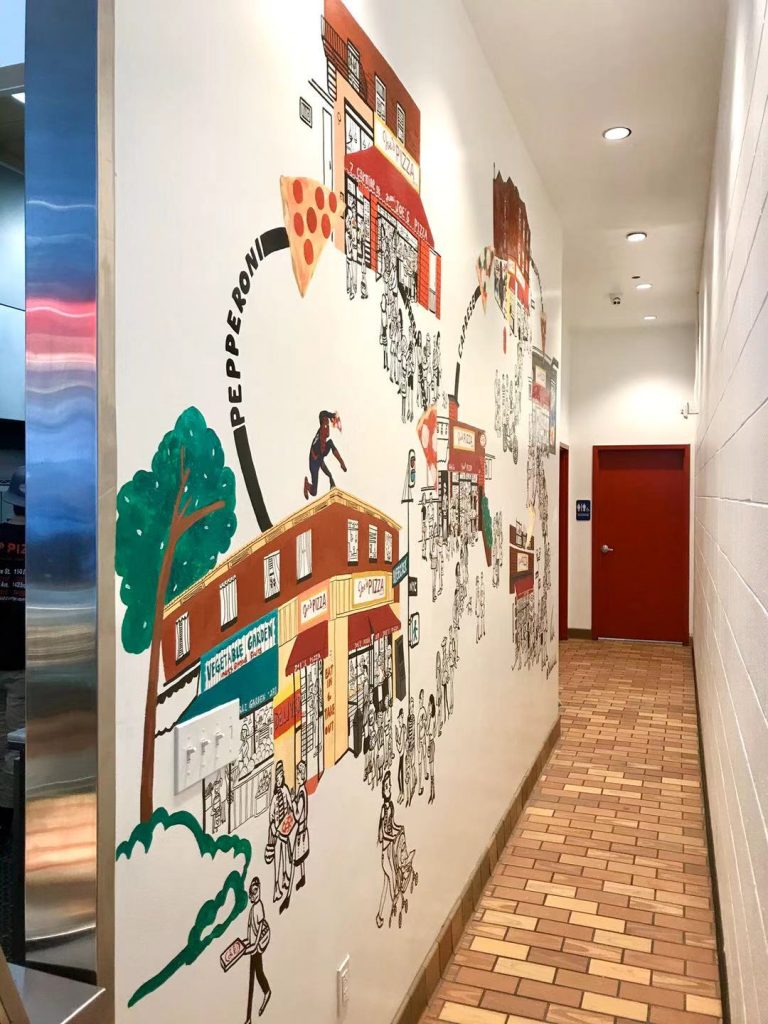 She said she could tell how popular this pizza store is in this campus neighborhood. From the store opens at 11am to 12am it closes, there is always a long line. Even in a cold windy snowy day, people still love to come here to grab a warm and crispy pizza – nothing is better than eating something warm and delicious in a freezing day. Lulu ate pizzas for 5 days during the working process, she never feels bored of that. She even said she would miss this delicious pizza when she left back to California. Ok, here comes a question to her. When Joe’s Pizza can bring the authentic Italian influenced New York pizza to Socal?