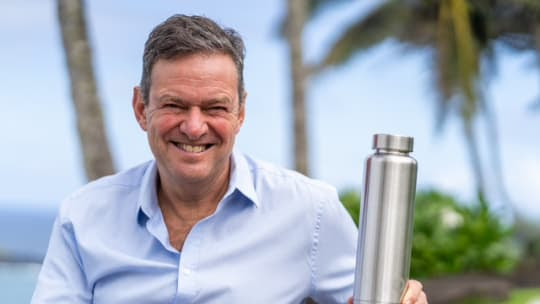 In a New Year call for urgent action to protect our right to clean water, Mr. Rittri noted that clean water is a fundamental human right recognized by the United Nations. Yet, he said, tens of millions of people in poor and rich countries alike lack access to safe tap water for personal and domestic use due to the impact of climate change and pollution on water availability and quality.

Mr. Rittri added that access will become less predictable due to more droughts, increased flooding, and ongoing contamination of freshwater sources. As a consequence, the Bluewater CEO said no one on the planet today should take having access to safe, great-tasting water for granted. He believes the need to reshape the future of access to clean water has never been more paramount.

A wholly-owned member of the Blue family, Bluewater is a world leader in advanced drinking water technologies for homes, businesses, and public dispensing solutions.

Bluewater has put finding sustainable ways to protect human health from the impact of toxic contaminants in drinking water at the heart of its business mission. The company is seeking to empower consumers and businesses with technological solutions that help assure access to better tap water quality.

A Bluewater study in February 2021 confirmed that the company’s top-of-the-line Bluewater Pro purifier successfully removes up to 99.99% of health-threatening PFAS chemicals from water, including PFOA, PFOS, PFBA, and PFBS, which have been found in the tap water of communities worldwide.

Bluewater has waged a campaign against single-use plastic bottles since its founding in 2013 by Bengt Rittri. The Swedish environmental entrepreneur has spurred the development of a zero plastic bottle business model by Bluewater that enables events, festivals, and other public dispensing operations to harness a planet-friendly hydration ecosphere combining Bluewater’s water purification solutions with the firm’s sustainable water bottles.

“Most single-use plastic bottles of water end up in oceans and landfills where they break down into chemical-leaching microplastics that threaten human health and wellbeing by disrupting human hormones,” said Mr. Rittri. He noted that recent research by environmental scientists at the New York University School of Medicine found microplastics used in bottles and polyester textiles are ten times higher in baby poop than in adult stool.

The Bluewater chief executive and owner said there was an urgent need for the world to understand that clean drinking water is a finite source.

“Of all the water on our planet, barely 3 percent is fresh, and that is under threat from industrial and agricultural pollution, overdevelopment, and the emerging climate catastrophe. It’s time to reshape the way we access, produce and use clean water. The onus is increasingly upon us as individuals to ensure the water we put into our bodies is clean of chemicals and other toxic junk,” Mr. Rittri said.