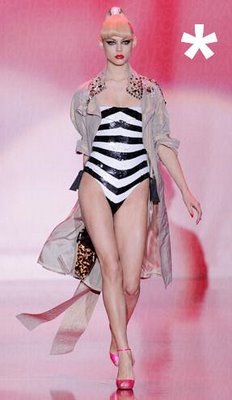 This week marks Barbie’s 50th anniversary. The most successful doll in history made it’s début on 9 March 1959. The very first Barbie dolls wore a black and white swimsuit and high-heeled sandals.

Who was Ken based on?: Handler’s son, also named Ken.
Ken’s last name: Carson
Their status: They broke up in 2004 but got back together two years later.

Barbie(TM) Signature Shop at the Bay – A lifestyle experience shop featuring fun Barbie(TM) decor and customized fixtures will be a beacon of fashion and fun for today’s trend-setting stylista; at this
exclusive Barbie(TM) shop in a prime location on the main floor, women of all ages can find Barbie(TM) branded t-shirts, exclusive jewelry designs, accessories, a limited edition Assouline coffee table book , Barbie Collectible dolls and more
– Window Shopping for the Barbie(R) Look – Three windows will be creatively styled out with fun backdrops featuring iconic Barbie(R) herself. Life-sized Rootstein Barbie(TM) mannequins will be dressed in Barbie(TM) by David Dixon hot off the runway looks, following his fashion show on March 16th
– Straight from the Barbie(TM) Fashion Show – Immediately following the first-ever Barbie(TM) runway show at LG Fashion Week, several of the Barbie(TM) by David Dixon ready-to-wear outfits will come to the Bay to be displayed in the Barbie(R) Signature Shop on the main floor and will also be available to purchase in Fall 2009
– A Fashion Salute to Barbie(R) – The Barbie(TM) Signature Shop at the Bay will be flanked by 12 of the most fashionable dolls, including Barbie designed by Diane Von Furstenberg, Burberry, Armani and select Barbies designed by Bob Mackie,
– Barbie’s Dream House – Classic, traditional, sophisticated and modern
– Glenn Dixon has created a romantic and whimsical furniture line for Barbie’s 50th birthday. Exhibited exclusively at the Bay, the line includes chairs, cushions, ottomans and Barbie’s Barbie Vintage
Settee
– Barbie Story Booth – Barbie lovers will have a chance to record their very own Barbie story for a limited time from March 17 – 20th.