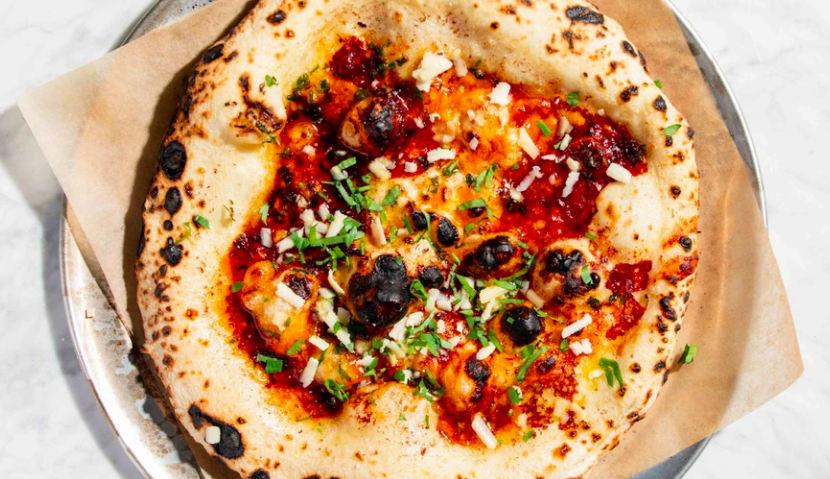 As restaurants across the USA call out Americans to order from their favourites during self-isolation known as ‘The Great American Takeout’ we would think Pizzas would definitely be in the top list of takeouts that people love to order.

They have collated data and created a visual USA map to reveal the top three most in-demand pizza pies across the 11 pizza-loving cities.

Pizza Oven Specialists Gozney have analysed recent data to reveal the most reviewed and in-demand pizza styles across 11 pizza-loving US cities that locals are eating the most.In Las Vegas, local pizza lovers appear to order and chow down on New York style pizza the most, followed by the firm favourite Traditional Pan Style pizza and finishing with Deep Dish pizza in third place

In general the research also shows Neapolitan pizza proved to be the most popular having been mentioned as one of the top three favourites in 9 cities with Traditional Pan in second place, New York Style in third place as the top three most popular styles of pizza across all cities.

However, Traditional Pan reigns as the most popular number one pizza style in 4 cities, making it the most popular overall. As expected, and meeting current trends, Neapolitan pizza was the highest searched phrase with New York pizza lagging in second place.

By cross referencing TripAdvisor and Yelp data for the top 10 restaurants in the following states, Gozney identified each states and cities favourite pizza pies and have created the infographic below detailing each top cities top three pizza styles.

As expected, and meeting current trends, Neapolitan pizza was the highest searched phrase with New York pizza lagging in second place. Neapolitan pizza is a classic Naples style pizza – that must be cooked in a traditional wood fired oven. By cross referencing Tripadvisor a Yelp data for the top 10 restaurants in the following states, Gozney identified each states and cities favourite pizza pies. 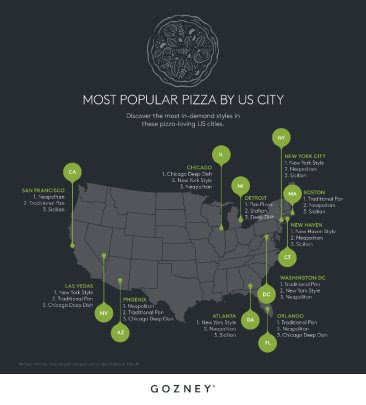 Pizza cities in the US

It would be a crime if New York style pizza didn’t come in first place here. Designed for eating on the go, this pizza is a fusion of Italy and New York. In second place is the classic Neapolitan and Sicilian varieties. Salivating? Try Gozney’s New York pizza.

Neapolitan pizza scoops the title as most popular in San Francisco, followed by Traditional Pan style pizza, with Sicilian pizza in third, just like mama used to make.

Traditional Pan style pizza wins first place, this pie is cooked in a dish instead of directly on the oven floor, unlike New York pizza, in second place and Neapolitan pizza, third place.

Hedonistic Las Vegas lovers appear to chow down on New York style pizza the most, followed by the firm favourite Traditional Pan Style pizza and finishing with Deep Dish pizza in third place.

Phoenix nationals like their pizza ovens hot, like their summers. Requiring a scorching 950 ºF of heat, Neapolitan pizza is most popular, followed by Traditional Pan style pizza and then Deep Dish pizza.

Wide, flat and often served by the slice New York pizza is top in Atlanta, followed by Neapolitan and Sicilian pizza.

Detroit locals put their hands up for thick, rectangular pan pizza, such as the Detroit Style pizza. Keeping up the trend for thick crust, Sicilian and deep dish pizza comes in second and third.

According to reviews, Neapolitan pizza proved to be the most popular in the top 3 styles of pizza across all states, whilst Traditional Pan pizza proved popular through number 1 rankings.

In order to create the perfect Neapolitan pizza, you need an oven which reaches temperatures of over 900°F. You can now achieve this restaurant grade pizza at home with Gozney Roccbox, the portable pizza oven.

Gozney manufacture a world-class range of innovative stone and fire ovens, designed to share eating food. The story starts in 2010, as founder Tom Gozney, driven by a passion for food and love for the ancient practice of stone and fire cooking, designed a range of high quality, precast stone ovens. Designed and made in the UK, the ovens inspired a movement in stone cooking at home. Its success laid the foundations to launch a comprehensive range of commercial wood and gas fired ovens that can now be found in a great number of the world’s leading commercial kitchens.

Gozney’s mission is centered on the creation of delicious food and innovative design with the objective of listening to customers’ challenges and innovate as a direct response. A clear example of this has been the creation of Roccbox, the world’s first portable, insulated stone floor oven, which enables cooking with fire and stone to be accessible to a wider audience.

The Roccbox is available for $899, visit the Gozney brand site and shop Roccbox at https://www.gozney.com/products/home-ovens/roccbox/