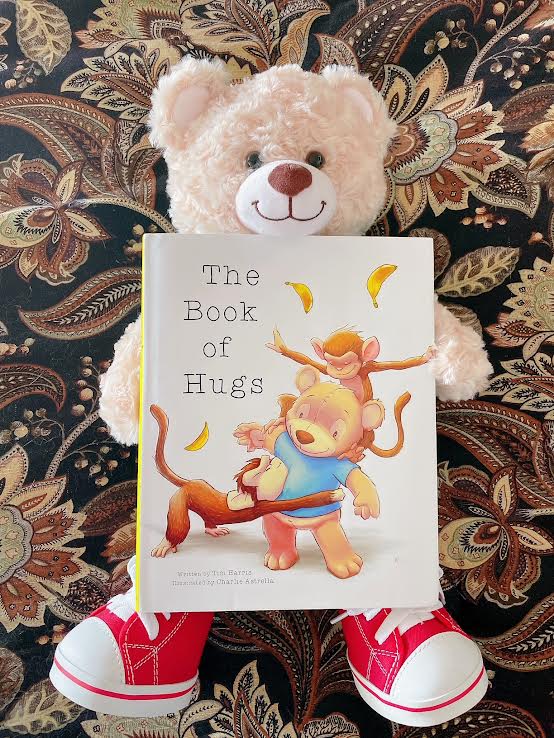 Share some love and give a hug with Teddy Bear Tim. Teddy Bear Tim LOVES hugs! He loves hugs so much that he wants to share all of his favorite kinds of hugs with you. Whether it’s a happy hug, a sad hug, a fast hug, or a bear hug, Tim has three simple steps to follow to make sure you’re giving the very best hug you can give. Inspired by Tim Harris’s love for giving big bear hugs and his restaurant that offered up hugs on the menu, Book of Hugs, this charming how-to guide gives readers so many reasons to give someone a big hug! 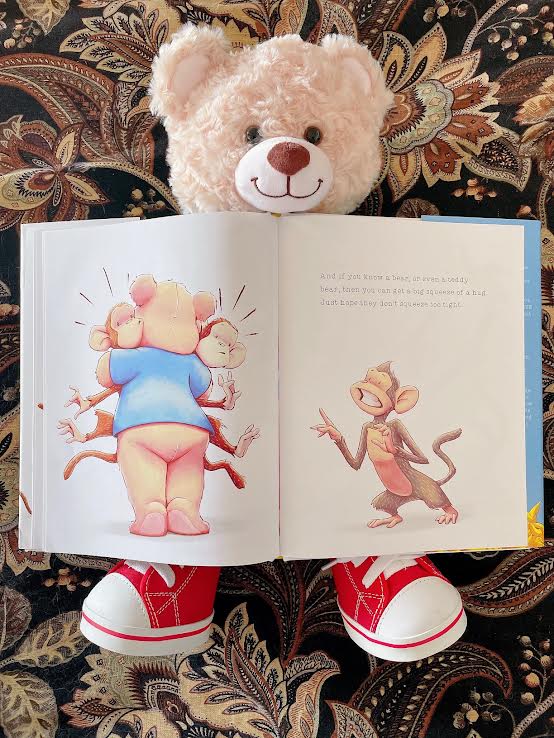 Motivational speaker, disability advocate, and restaurateur Tim Harris’ debut picture book, Book of Hugs, publishes this September. Inspired by Tim’s love of giving big bear hugs and his restaurant that offered up hugs on the menu, this charming how-to guide inspires readers with plenty of reasons to give someone a big hug!

Colorful characters Teddy Bear Tim and his trio of energetic monkey friends share tips on delivering the very best hugs – no matter whether they are happy hugs, sad hugs, fast or slow hugs. Every type of hug is about sharing love. As the book says, “Love is the most important part!” 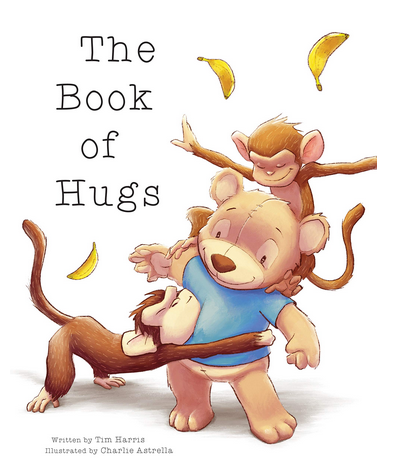 In our new world of pandemic etiquette and a post #MeToo era, setting and respecting boundaries and gaining consent are among the most important practices we can instill in children. Book of Hugs is an entertaining story that can lead into deeper discussions about permission and new norms.

About the author: Tim Harris

Tim Harris is a motivational speaker, business owner, and disability advocate. He is really good at giving hugs. For a long time, Tim owned his own restaurant and he even had free hugs on the menu. They were so popular that Tim has now hugged over 75,000 people, including the president of the United States! Tim really does love hugs, mostly because he loves LOVE and that is what hugs are all about. This is Tim’s first children’s book.

About the illustrator: Charlie Astrella

Chalrie Astrella graduated from the University of Teesside with a First Class Honors Bachelor of Arts degree in Computer Animation. He now works in 3D modeling, animation, and 2D illustration to create works of art he is proud of. He has experience in advertising, product design, video games, and children’s books.

On the weekend of January 21st – 23rd, Tim and his family are relaunching the Hug-a-thon. The goal is to get ONE MILLION hugs and ONE MILLION dollars in donations, all to benefit the Hearts of Joy International charity. Details are unfolding now and more will be shared in the Fall. This incredible non-profit provides life-saving heart surgery for children born with Down Syndrome. Learn more at Hearts of Joy International. 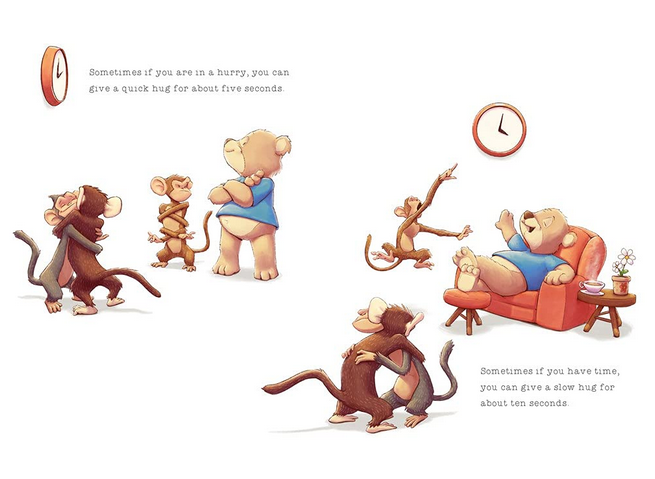 ADVANCE PRAISE FOR BOOK OF HUGS

“With the help of some monkeys, a teddy bear teaches readers all about hugs. Teddy Bear Tim (the author’s teddy-bear persona) waves to readers and declares, ‘I LOVE hugs!’ His upbeat narration continues as Teddy Bear Tim meets up with a trio of cuddly monkeys who share the love for hugs—and bananas. The four characters list many different kinds of hugs (like ‘happy hugs,’ ‘slow hugs,’ or ‘monkey hugs’) before Teddy Bear Tim shares the ‘three simple steps’ to giving a hug. They are: ask first, open arms wide, and wrap the other person in a hug (‘tight, but not too tight’). Once the instructions are given, Teddy Bear Tim describes some hugging scenarios and acts them out with the monkeys. From running full-bore into each other’s arms to a 5-second ‘quick hug,’ the hugs all point back to Teddy Bear Tim’s key precept: ‘The LOVE is the most important part.’

Since 2005 Flowerpot Press has been planting the seeds that help young minds grow, offering a broad range of books.  The Hayes family has been in the publishing and media business for two generations now. The family members grew up living in the midst of the golden periods of publishing and media distribution.

Watching and participating in the growth of their father’s children’s publishing business, they learned from the ground up and understood the unique character and needs that publishing for young children demanded. Anne and Pat served in every role from warehouse operation to acquisition, design, licensing, printing production, and editing to name a few areas.

As entrepreneurs, they separately and together founded companies still owned, integrating other media such as video and music. This well-rounded creative team uses a hands-on approach in every aspect of the business, first and foremost because they love it. Pat is also a published author in his own right. Anne (our publisher and CEO) lives in the Toronto area with her husband and family operating the Canadian office of Flowerpot Press, while Pat and his family live in Franklin, Tennessee, and operate the US office of the company.