The reported shootings of Asian American women on Tuesday in Atlanta is an unspeakable tragedy. With hate crimes skyrocketing during the pandemic, it is so important that we stand up against anti-Asian racism and the ways in which you can help support the community. Stop AAPI Hate, a national coalition documenting and addressing anti-Asian discrimination during the pandemic, said it received nearly 3,800 self reports of anti-Asian hate incidents between March 2020 and last month. Women made up a far higher share of the reports, at 68% versus 29% for men. There is an intersectional dynamic going on that others may perceive both Asians and women and Asian women as easier targets.

Racism against Asians or Asian-Americans didn’t start with the Covid-19 pandemic. The story of anti-Asian hate in the US is long and varied and, like most of society’s ills, can be linked back to colonialism, imperialism, and white supremacy. Enough is enough. We are no longer staying silent about anti-Asian racism.

California base artist Lulu, who moved from China to US in 2014, she had 3 years graduate school study in FIT New York. When she lived in New York, she met and married with Ryan, an American man who respects and supports her. She moved to California with Ryan and decided to become a permanent resident in US. Asian Discrimination is always an issue and she also heard some stories from her Asian friends about the inequities to American Asian societies. After Covid-19 pandemic started, she is shocked that there are so many anti-Asian crimes are happening, in New York, in California, in almost every state of US. “We have to stand up this time. Using our voices to support Asian community in US.” She uses her Chinese painting art techniques to illustrate three paintings to unveil the Asian discrimination and spread out her voices. 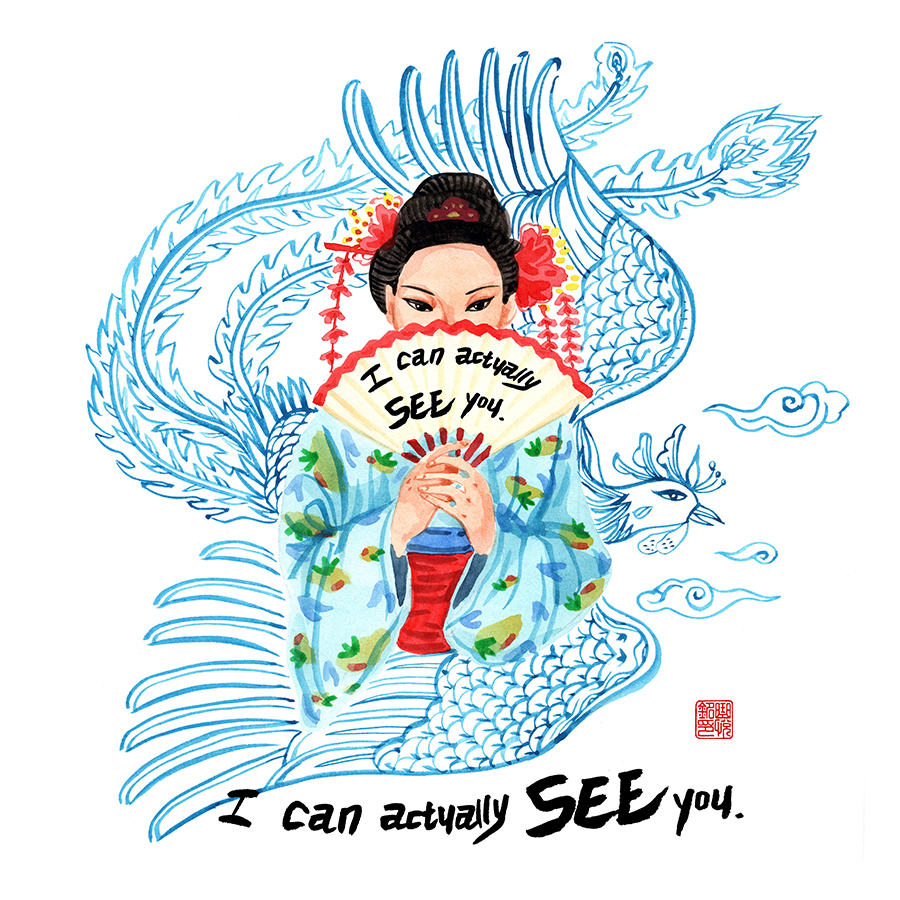 Phoenix – I can actually SEE you.
Stop with the slanted-eye racist gestures.
Different is normal. We are proud of our looks. 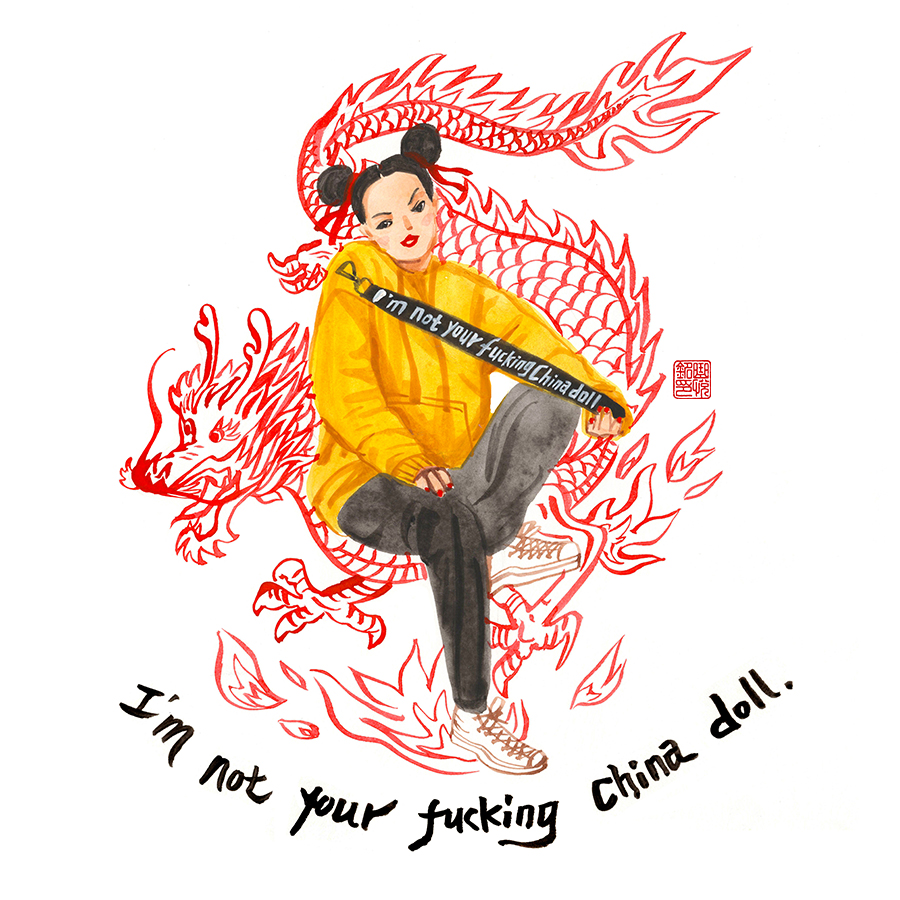 Dragon – I’m not your fucking China doll.
Stop the submissive, hypersexual and exotic stereotypes of Asian Women.
We are not your Geisha, Dragon Ladies and Asian Baby Girls!

There is a long history of misogyny and violence directed specifically at Asian women by men of all races. Asian-American women have long been stereotyped as sexually submissive, portrayed in popular culture as exotic “lotus blossoms” and manipulative “dragon ladies,” or as inherently superior to other women in a way that erases their individuality. 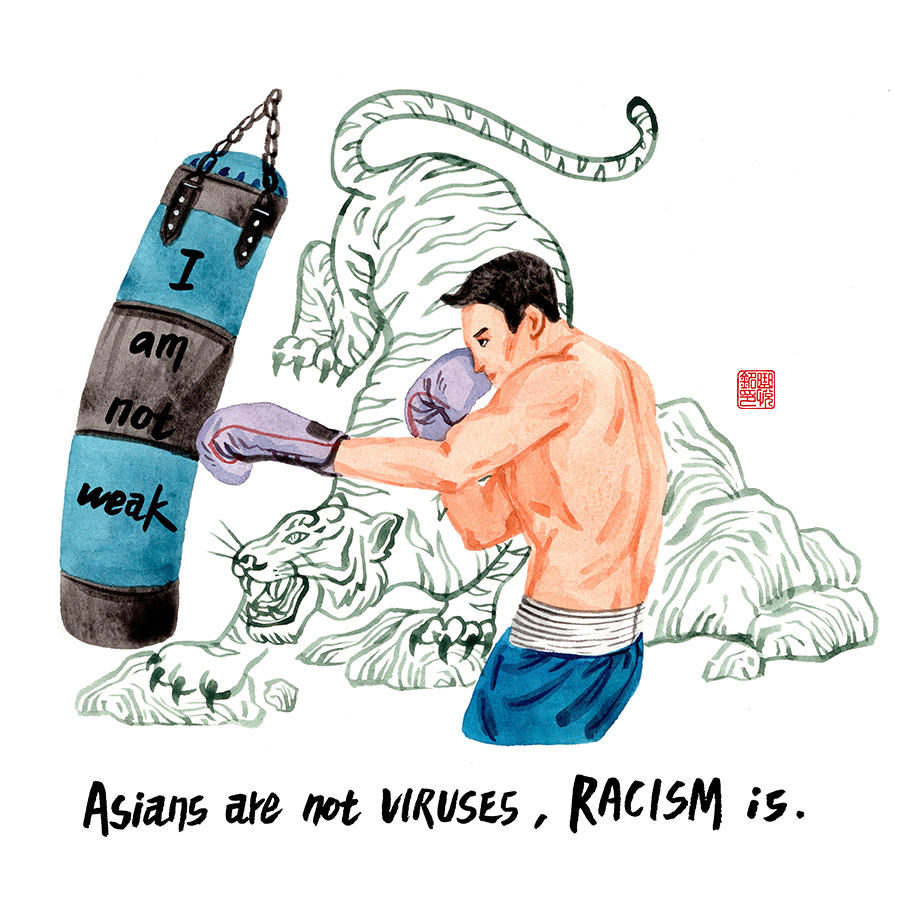 Tiger – I am not weak!
Stop the desexualization of the Asian male
We are not weak at all!

Asians were characterized as passive, effeminate and weak. From a study, the top five stereotypes experienced by East Asian men were being good at math (79%), being good with computers (72%) and having a small penis (69%), having slanted eyes (65%), and having kung fu / martial arts skills (58%). And usually Asian men are told that they simply don’t possess the ingredients to be considered masculine or attractive. Stereotypes hurt and are not true. I have so many Asian male friends and also my dad, my cousins, they are strong, smart, positive and attractive. I agree that some of us are very good at math, and I take it as a compliment to say that we are smart. But being good at math doesn’t mean that we are not good at arts, sporting or socializing.

RACISM is a dangerous virus can make people sick. Just like what Nelson Mandela said, “No one is born hating another person because of the color of his skin, or his background, or his religion. People must learn to hate, and if they can learn to hate, they can be taught to love, for love comes more naturally to the human heart than its opposite.”